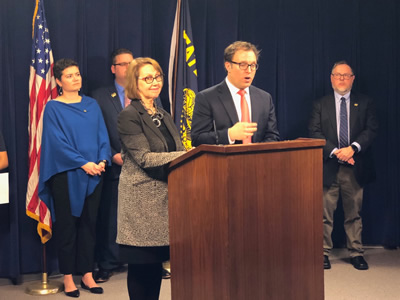 Oregon Attorney General Ellen Rosenblum and other consumer advocates today testified before the Oregon House Business and Labor Committee in support of stronger protections for Oregon student loan borrowers who are amassing educational debt at staggering rates. In Oregon, it is estimated that outstanding student loan debt has surpassed $18 billion, with the average debt load per Oregon borrower at over $27,000.

The legislation, HB 2258 and SB 279, would adopt an Oregon Student Loan Bill of Rights instituting basic consumer protections for student loan borrowers. The legislation would also create a student loan ombudsperson (ombuds) to monitor student loan services, and educate borrowers who are navigating debt management, refinancing and consolidation, which can be very confusing.

“For many Oregonians, student debt is inescapable—incurred in exchange for the ability to graduate with a degree and the hoped for opportunities that go with that accomplishment,” testified Attorney General Rosenblum. “On top of the amount of the debt, these loans are complex. Directly upon graduating, students have to understand terms and conditions, choose interest rates, and make other financial decisions that will impact the rest of their lives.  Graduates are often asked to make financial decisions with relatively poor information, and in a market where debt servicers are concerned about their bottom lines and ultimately calling the shots.”

In 2015, Connecticut became the first state to create a system for licensing and regulating student debt servicers, and Oregon’s legislation would mirror Connecticut’s “Student Debt Bill of Rights”. Under the proposed legislation, student debt servicers would be required to be licensed with the Oregon Department of Consumer and Business Services, and refrain from fraudulent, deceptive, or dishonest dealing with students. The ombuds program would also help students who need assistance resolving complaints, or information about student loan repayment options. An upcoming amendment to the bill would provide a grant for counseling services to be administered by the Higher Education Coordinating Commission.

“This is the real story of our student debt crisis—millions of borrowers’ lives and livelihoods are being crushed in the gears of a broken student loan system. And, at the center of it all are student loan servicers—some of the largest financial services companies in America. These are the out-of-state companies that will determine the financial future of hundreds of thousands of borrowers in this state, including more than 87,000 borrowers across rural Oregon,” testified Seth Frotman.

In 2017, AG Rosenblum also helped successfully pass legislation requiring all Oregon colleges and universities to send students annual, easy-to-understand letters explaining the scope of their federal educational debt. The letters to student borrowers must include the amounts of loans taken out, and an approximate payment plan.

The Oregon Department of Justice (DOJ) is led by Attorney General Ellen Rosenblum, and serves as the state’s law firm. The Oregon DOJ advocates for and protects all Oregonians, especially the most vulnerable, such as children and seniors.