Attorney General’s Statement on the Passing of Justice Linde 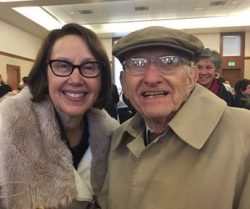 This week we lost a great Oregonian — Supreme Court Justice Hans Linde, who died at the age of 96. Justice Linde possessed a giant and generous mind and heart.

Just getting to Portland (from Germany and Denmark, via New York) in the 1940s was something of a miracle for him and his family. His life afterward was a marvel of teaching — and making — the law.

To my great good fortune, I was one of his students, in law school and ever afterwards. He mentored many, many lawyers, including several very prominent professors and judges, and was a prolific and brilliant author whose legal writings included many significant judicial opinions, particularly on the importance of state constitutional law to civil liberties.

He is survived by Helen, his wife of 75 years, and their two children, David and Lisa, and two grandchildren.

At an event a few years ago, I asked Justice Linde what he was doing to occupy his time now that he was no longer commuting to his Salem office at Willamette Law School most days with Oregon Court of Appeals Judge Rex Armstrong.

He answered, “I take care of Helen, who took care of me for all those years. I have never been happier.”

I will always cherish that conversation and feel so lucky to have known this remarkable teacher, intellect, jurist—and caring man.

The Oregon Department of Justice (DOJ) is led by Attorney General Ellen Rosenblum and serves as the state’s law firm.