I just feel sad today — incredibly sad — at the loss of our good friend, “Commish” Nick Fish. In his poignant “resignation” letter three days ago, Nick said, “The future is bright.” I’m sure he believed that. But today our skies are cloudy, suffused with a terribly empty feeling in the hearts of everyone who knew and loved him — and of the thousands of Portlanders who benefited from his deep commitment to them. We all grieve that such a bright light of our community has been extinguished so prematurely. 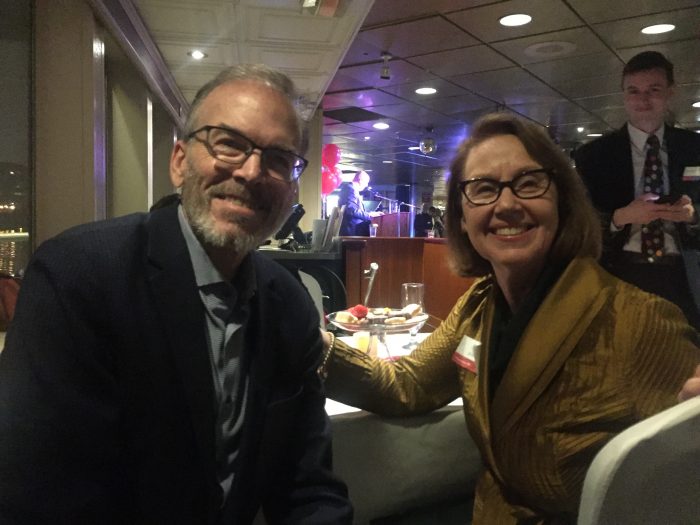 November 5, 2019, aboard the Portland Spirit — celebrating Bank of America’s award of a $200,000 Neighborhood Builders grant to the Portland Parks Foundation and to Financial Beginnings.

I got to know Nick shortly after he arrived here with his family from New York in the mid-1990s. Nick wanted to meet everyone he could. So he was invited to join the United States District Court Historical Society board, which I chaired at the time. At his request, I made him the “picnic chair.” As with everything he would do over the subsequent 20-plus years, it was a role he took on with unabashed gusto. Nick was genuinely thrilled to become acquainted with the “real people” who made a picnic of this size happen — from the folks at the “porta potty” and rental equipment companies to the BBQ caterers and the country music band. He refused to delegate a single job! Nick seemed naturally to love everyone, and he got a lot of love back. After that first picnic I could understand how he helped make everybody — and every organization he worked with —better. It was instinctive, and it made him both effective and beloved.

I have always appreciated Nick for his inclusive nature. Even though we had very different jobs, he found ways to collaborate — whether it was through our mutual concern about housing needs or eradicating the scourge of elder abuse. He was always the inviter and the convener. And if you were really lucky, you were included in special invitations — like the amazing celebration of the Portland Thorns after the U.S. team’s World Cup victory at the Commissioner’s office just a few months ago. (When our girls were growing up in the 90’s and playing soccer for local teams, we were all “regulars” in the stands at the UP women’s games. I don’t think I’ve ever seen Nick happier than those weekend afternoons with Maria.)

Nick was fun to be with. Most amazing of all, he took that special quality into politics. He always had a twinkle in his eye, and he always had something to share — an insight about the city, a morsel of “gossip” perhaps, or a family story about his kids, in whom he took so much pride. There was also my favorite Nick Fish “line.” Recognizing that being married to Richard, a weekly newspaper publisher, was not exactly going to win me friends, he would often say to me: “Ellen, you must have married for love!”

Commish, we married you for love. And now we miss you terribly. We all so want to believe your parting words. But a light has gone out, and we grieve with your beautiful family — Patricia, Maria and Chapin — and all in this community who so admired and respected you for who you were and what you brought, with such lasting grace, to this wonderful place.