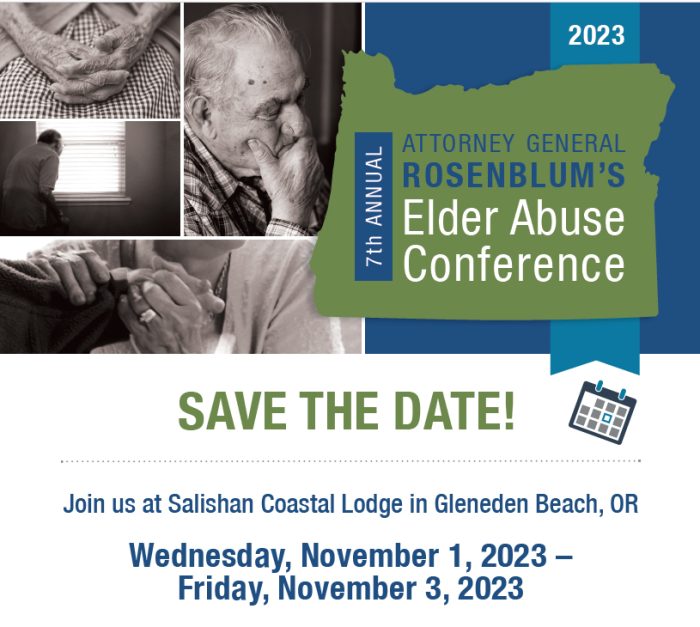 Fighting elder abuse is a top priority for the Oregon Department of Justice (DOJ) and Attorney General Ellen F. Rosenblum. It is especially important as Oregon’s population of older residents continues to grow. In 2014, an estimated 16 percent of Oregonians were 65 or older. By 2030, that number is expected to rise to 20 percent.

Nationally, financial abuse costs older adults billions of dollars. Various studies estimate the cost from $2.9 billion per year to many times that amount. Women were nearly twice as likely to be victims of elder financial abuse as men.

The Oregon DOJ has taken strong steps to address and prevent this growing epidemic and hold perpetrators accountable.

In September 2016, AG Rosenblum appointed Oregon’s first statewide elder abuse prosecutor. Oregon is only the third state in the country to have a statewide prosecutor devoted entirely to elder abuse. Funding for the new Elder Abuse Unit was the AG’s highest priority for the 2016 legislative session.

The Elder Abuse Unit works with Oregon’s 36 district attorneys and other prosecutors, law enforcement and community partners throughout the state.

Types of elder abuse include:

Victims of elder abuse may be slow to recognize and report the abuse. Too often, victims suffer in silence. For that reason, it is important to recognize the following warning signs.

Learn how to spot Medicaid fraud, and how to report it »